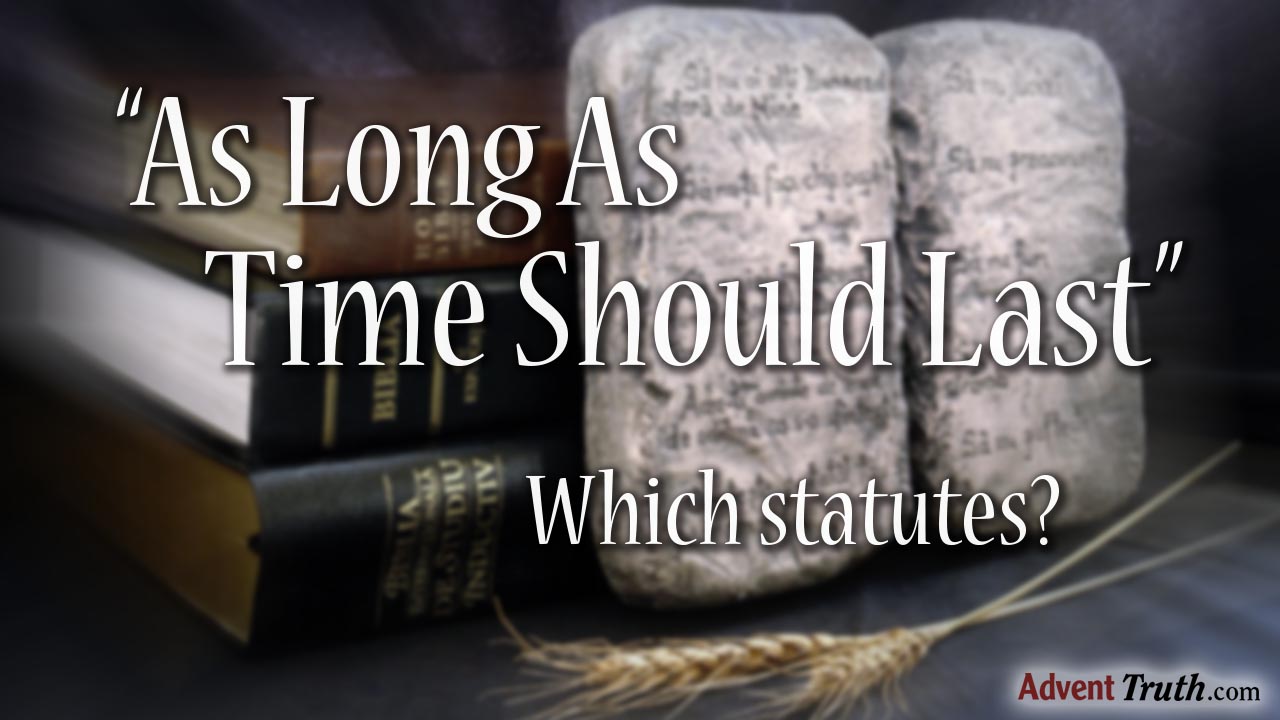 A statement by Ellen White referred to statutes which were not to pass away and were to be binding “as long as time should last.” Some of our dear friends would like to apply this to the festivals, with the view that they have a religious duty to observe them.

Let us examine this. Here is the statement:

“In consequence of continual transgression, the moral law was repeated in awful grandeur from Sinai. Christ gave to Moses religious precepts which were to govern everyday life. These statutes were explicitly given to guard the ten commandments. They were not shadowy types to pass away with the death of Christ. They were to be binding upon men in every age as long as time should last. These commands were enforced by the power of the moral law, and they clearly and definitely explained that law.” RH, May 6, 1875, par. 10.

What were these statutes? In context, from the same article (RH May 6, 1875), we read the following:

“The statutes and judgments specifying the duty of man to his fellow-men, were full of important instruction, defining and simplifying the principles of the moral law, for the purpose of increasing religious knowledge, and of preserving God’s chosen people distinct and separate from idolatrous nations.

“The statutes concerning marriage, inheritance, and strict justice in deal with one another, were peculiar and contrary to the customs and manners of other nations, and were designed of God to keep his people separate from other nations. The necessity of this to preserve the people of God from becoming like the nations who had not the love and fear of God, is the same in this corrupt age, when the transgression of God’s law prevails and idolatry exists to a fearful extent. If ancient Israel needed such security, we need it more, to keep us from being utterly confounded with the transgressors of God’s law. The hearts of men are so prone to depart from God that there is a necessity for restraint and discipline.” { RH May 6, 1875, pars. 5, 6 }

“God graciously spoke his law and wrote it with his own finger on stone, making a solemn covenant with his people at Sinai. God acknowledged them as his peculiar treasure above all people upon the earth. Christ, who went before Moses in the wilderness, made the principles of morality and religion more clear by particular precepts, specifying the duty of man to God and his fellow-men, for the purpose of protecting life, and guarding the sacred law of God, that it should not be entirely forgotten in the midst of an apostate world.” { RH May 6, 1875, par. 14 }

How did the above explain and enforce the 10 commandments?

An example is the one where if you dig a hole and your neighbour’s animal falls in and dies, you pay for the animal – that’s where we get the concept of public liability.

This helps to explain and enforce the principles of the 10 commandments. Moses made use of these judgments and statutes in his work:

“When they have a matter, they come unto me; and I judge between one and another, and I do make them know the statutes of God, and his laws.” Exodus 18:16.

The article also explains the laws which were not the same as the statutes which directly related to and explained the moral law:

“God’s people, whom he calls his peculiar treasure, were privileged with a two-fold system of law; the moral and the ceremonial. The one, pointing back to creation to keep in remembrance the living God who made the world, whose claims are binding upon all men in every dispensation, and which will exist through all time and eternity. The other, given because of man’s transgression of the moral law, the obedience to which consisted in sacrifices and offerings pointing to the future redemption. Each is clear and distinct from the other. From the creation the moral law was an essential part of God’s divine plan, and was as unchangeable as himself. The ceremonial law was to answer a particular purpose of Christ’s plan for the salvation of the race. The typical system of sacrifices and offerings was established that through these services the sinner might discern the great offering, Christ. But the Jews were so blinded by pride and sin that but few of them could see farther than the death of beasts as an atonement for sin; and when Christ, whom these offerings prefigured, came, they could not discern him. The ceremonial law was glorious; it was the provision made by Jesus Christ in counsel with his Father, to aid in the salvation of the race. The whole arrangement of the typical system was founded on Christ. Adam saw Christ prefigured in the innocent beast suffering the penalty of his transgression of Jehovah’s law.

“The law of types reached forward to Christ. All hope and faith centered in Christ until type reached its antitype in his death.” { RH May 6, 1875, pars. 4, 5 }

It is interesting that today we of all people should understand the place and significance of the ceremonial law – the same article also says:

“Christians who profess to be Bible students can appreciate more fully than ancient Israel did the full signification of the ceremonial ordinances that they were required to observe. If they are indeed Christians, they are prepared to acknowledge the sacredness and importance of the shadowy types, as they see the accomplishment of the events which they represent. The death of Christ gives the Christian a correct knowledge of the system of ceremonies and explains prophecies which still remain obscure to the Jews. Moses of himself framed no law. Christ, the angel whom God had appointed to go before his chosen people, gave to Moses statutes and requirements necessary to a living religion and to govern the people of God. Christians commit a terrible mistake in calling this law severe and arbitrary, and then contrasting it with the gospel and mission of Christ in his ministry on earth, as though he were in opposition to the just precepts which they call the law of Moses.” {RH May 6, 1875, par. 12}

It is certainly clear that the intent of this article was to uphold the law, both moral and ceremonial. The moral law, including its associated protective statutes, was said to be binding, “as long as time should last.” The ceremonial, “shadowy types,” which “was established that through these services the sinner might discern the great offering, Christ,” was in force “until type reached its antitype in his death.”

We gain much by studying the ceremonial law, but this is not to say that it is still today “binding.” Its role for us is to teach us about Christ’s ministry, but we are not expected to observe its regulations.

In fact, an article appeared a few years later, saying this, in context of the ordinance of the Lord’s Supper:

“It was Christ’s desire to leave to his disciples an ordinance that would do for them the very thing they needed,—that would serve to disentangle them from the rites and ceremonies which they had hitherto engaged in as essential, and which the reception of the gospel made no longer of any force. To continue these rites would be an insult to Jehovah.” { RH June 14, 1898, par. 16 }

Please browse the other articles in this section for more on the types and ceremonies and the topic of the festivals.

2 thoughts on “As Long As Time Should Last”