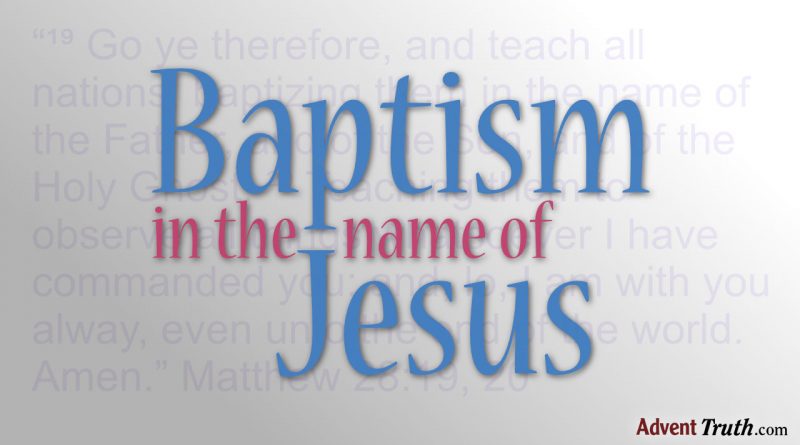 Why do we perform the baptism ceremony, invoking the name of the Father, Son and Holy Ghost?

Why do several Scripture references simply state that people were baptized in the name of Jesus? Does this mean we should use only those words for the baptismal ceremony?

The full research material can be found in a PDF here. Continue below to read the main points.

Who were present at the baptism of Jesus?

“9 And it came to pass in those days, that Jesus came from Nazareth of Galilee, and was baptized of John in Jordan. 10 And straightway coming up out of the water, he saw the heavens opened, and the Spirit like a dove descending upon him: 11 And there came a voice from heaven, saying, Thou art my beloved Son, in whom I am well pleased.” Mark 1:9-11.

Jesus was there to be baptized, the Holy Ghost appeared in a form like a dove, and the voice of the Father was heard speaking from heaven. With this in mind, let us consider:

What were Jesus’ parting instructions?

“18 And Jesus came and spake unto them, saying, All power is given unto me in heaven and in earth. 19 Go ye therefore, and teach all nations, baptizing them in the name of the Father, and of the Son, and of the Holy Ghost: 20 Teaching them to observe all things whatsoever I have commanded you: and, lo, I am with you alway, even unto the end of the world. Amen.” Matthew 28:18-20.

Note a few references regarding this practice:

“We are baptized in the name of the Father, and of the Son, and of the Holy Ghost, and these three great, infinite powers are unitedly pledged to work in our behalf if we will cooperate with them.” Lift Him Up, p. 109:2.

“Those who are baptized in the threefold name of the Father, the Son, and the Holy Ghost, at the very entrance of their Christian life declare publicly that they have accepted the invitation, ‘Come out from among them, and be ye separate, saith the Lord.’” SDA Bible Commentary, vol. 6, p. 1075:3.

“Baptism is a most solemn renunciation of the world. Those who are baptized in the threefold name of the Father, the Son, and the Holy Spirit, at the very entrance of their Christian life declare publicly that they have forsaken the service of Satan and have become members of the royal family, children of the heavenly King.” Testimonies, vol. 6, p. 91:3.

What is significant about the mention of the threefold name in baptism?

“The Father, the Son, and the Holy Ghost, powers infinite and omniscient, receive those who truly enter into covenant relation with God. They are present at every baptism, to receive the candidates who have renounced the world and have received Christ into the soul temple. These candidates have entered into the family of God, and their names are inscribed in the Lamb’s book of life.” SDA Bible Commentary, vol. 6, p. 1075:5.

“The fact that you have been baptized in the name of the Father, the Son, and the Holy Spirit is an assurance that, if you will claim Their help, these powers will help you in every emergency.” Testimonies, vol. 6, p. 99:1.

Who was the first on record to use the rite of baptism?

“In those days came John the Baptist, preaching in the wilderness of Judaea.” Matthew 3:1.

What was the purpose of his baptizing?

“4 John did baptize in the wilderness, and preach the baptism of repentance for the remission of sins. 5 And there went out unto him all the land of Judaea, and they of Jerusalem, and were all baptized of him in the river of Jordan, confessing their sins.” Mark 1:4-5.

“2 Annas and Caiaphas being the high priests, the word of God came unto John the son of Zacharias in the wilderness. 3 And he came into all the country about Jordan, preaching the baptism of repentance for the remission of sins; 4 As it is written in the book of the words of Esaias the prophet, saying, The voice of one crying in the wilderness, Prepare ye the way of the Lord, make his paths straight. 5 Every valley shall be filled, and every mountain and hill shall be brought low; and the crooked shall be made straight, and the rough ways shall be made smooth; 6 And all flesh shall see the salvation of God.” Luke 3:2-6.

This was known as the baptism of repentance.

“When John had first preached before his coming the baptism of repentance to all the people of Israel.” Acts 13:24.

What was John’s message to the people?

“5 Then went out to him Jerusalem, and all Judaea, and all the region round about Jordan, 6 And were baptized of him in Jordan, confessing their sins. 7 But when he saw many of the Pharisees and Sadducees come to his baptism, he said unto them, O generation of vipers, who hath warned you to flee from the wrath to come? 8 Bring forth therefore fruits meet for repentance: 9 And think not to say within yourselves, We have Abraham to our father: for I say unto you, that God is able of these stones to raise up children unto Abraham. 10 And now also the axe is laid unto the root of the trees: therefore every tree which bringeth not forth good fruit is hewn down, and cast into the fire. 11 I indeed baptize you with water unto repentance: but he that cometh after me is mightier than I, whose shoes I am not worthy to bear: he shall baptize you with the Holy Ghost, and with fire.” Matthew 3:5-11.

What did this baptism become known as?

“The baptism of John, whence was it? from heaven, or of men? And they reasoned with themselves, saying, If we shall say, From heaven; he will say unto us, Why did ye not then believe him?” Matthew 21:25.

What happened as Jesus’ ministry began to grow?

“22 After these things came Jesus and his disciples into the land of Judaea; and there he tarried with them, and baptized. 23 And John also was baptizing in Aenon near to Salim, because there was much water there: and they came, and were baptized. 24 For John was not yet cast into prison. 25 Then there arose a question between some of John’s disciples and the Jews about purifying. 26 And they came unto John, and said unto him, Rabbi, he that was with thee beyond Jordan, to whom thou barest witness, behold, the same baptizeth, and all men come to him. 27 John answered and said, A man can receive nothing, except it be given him from heaven. 28 Ye yourselves bear me witness, that I said, I am not the Christ, but that I am sent before him. 29 He that hath the bride is the bridegroom: but the friend of the bridegroom, which standeth and heareth him, rejoiceth greatly because of the bridegroom’s voice: this my joy therefore is fulfilled. 30 He must increase, but I must decrease.” John 3:22-30.

“The prejudice of the Jews was aroused because the disciples of Jesus did not use the exact words of John in the rite of baptism. John baptized unto repentance, but the disciples of Jesus, on profession of the faith, baptized in the name of the Father, Son, and Holy Spirit. The teachings of John were in perfect harmony with those of Jesus, yet his disciples became jealous for fear his influence was diminishing. A dispute arose between them and the disciples of Jesus in regard to the form of words proper to use at baptism, and finally as to the right of the latter to baptize at all.” Spirit of Prophecy, vol. 2, p. 136:3.

What did Jesus do in response to this situation?

“1 When therefore the Lord knew how the Pharisees had heard that Jesus made and baptized more disciples than John, 2 (Though Jesus himself baptized not, but his disciples,) 3 He left Judaea, and departed again into Galilee.” John 4:1-3.

Do we know that Jesus’ disciples still practiced this form after His ascension?

“1 And it came to pass, that, while Apollos was at Corinth, Paul having passed through the upper coasts came to Ephesus: and finding certain disciples, 2 He said unto them, Have ye received the Holy Ghost since ye believed? And they said unto him, We have not so much as heard whether there be any Holy Ghost. 3 And he said unto them, Unto what then were ye baptized? And they said, Unto John’s baptism. 4 Then said Paul, John verily baptized with the baptism of repentance, saying unto the people, that they should believe on him which should come after him, that is, on Christ Jesus. 5 When they heard this, they were baptized in the name of the Lord Jesus.” Acts 19:1-5.

“These brethren knew nothing of the mission of the Holy Spirit. When asked by Paul if they had received the Holy Ghost, they answered, ‘We have not so much as heard whether there be any Holy Ghost.’ ‘Unto what then were ye baptized?’ Paul inquired, and they said, ‘Unto John’s baptism.’

“Then the apostle set before them the great truths that are the foundation of the Christian’s hope. He told them of Christ’s life on this earth and of His cruel death of shame. He told them how the Lord of life had broken the barriers of the tomb and risen triumphant over death. He repeated the Saviour’s commission to His disciples: ‘All power is given unto Me in heaven and in earth. Go ye therefore, and teach all nations, baptizing them in the name of the Father, and of the Son, and of the Holy Ghost.’ Matthew 28:18, 19. He told them also of Christ’s promise to send the Comforter, through whose power mighty signs and 283 wonders would be wrought, and he described how gloriously this promise had been fulfilled on the Day of Pentecost.

“With deep interest and grateful, wondering joy the brethren listened to Paul’s words. By faith they grasped the wonderful truth of Christ’s atoning sacrifice and received Him as their Redeemer. They were then baptized in the name of Jesus, and as Paul ‘laid his hands upon them,’ they received also the baptism of the Holy Spirit, by which they were enabled to speak the languages of other nations and to prophesy. Thus they were qualified to labor as missionaries in Ephesus and its vicinity and also to go forth to proclaim the gospel in Asia Minor.” Acts of the Apostles, p. 282:1-283:1.

What does it meant to be baptized in the name of Jesus?

“3 Know ye not, that so many of us as were baptized into Jesus Christ were baptized into his death? 4 Therefore we are buried with him by baptism into death: that like as Christ was raised up from the dead by the glory of the Father, even so we also should walk in newness of life.” Romans 6:3, 4.

The words of the rite of baptism include mention of the Godhead by name, which is an important part of the service. There is more to it than this, however. Baptism into Christ represents a new life. It means to be born again a child of the King, with new motives and actions, and with a changed heart.