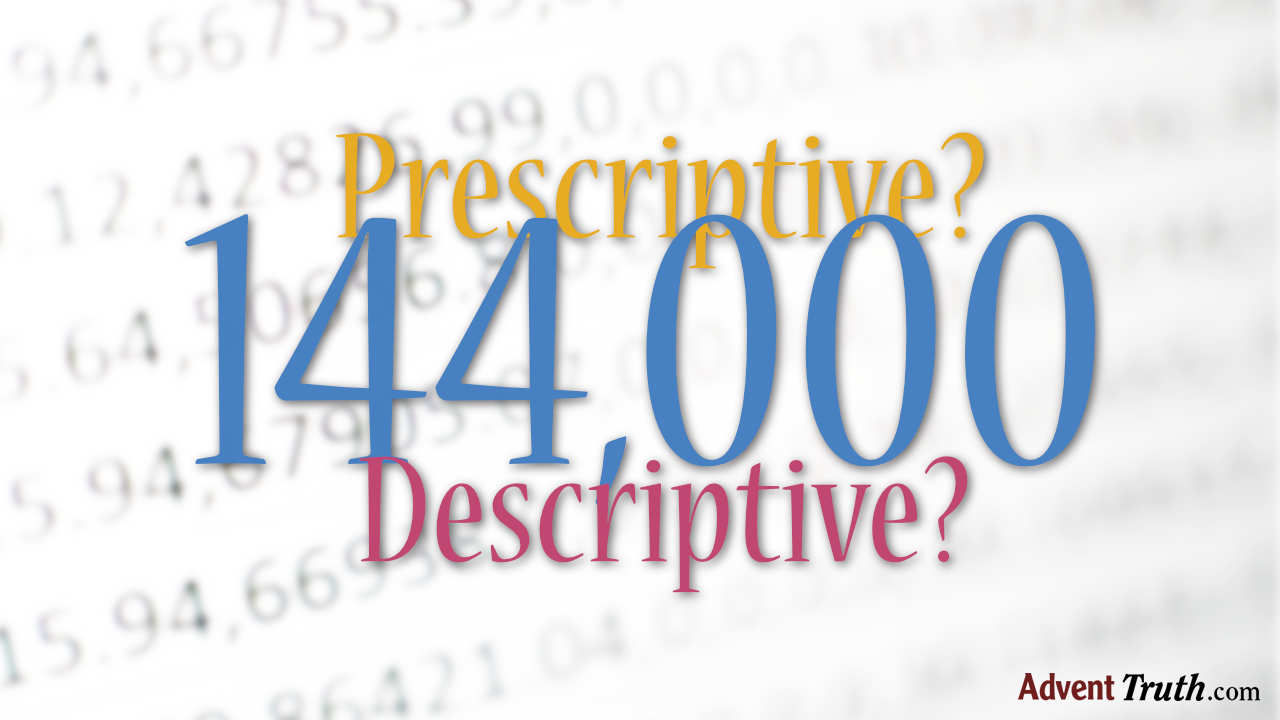 Why is the number 144,000 such a perfectly even number? Does this mean that God opens this many spaces and then when they are full, that’s it? If you’re too late you miss out?

The way it reads in the Bible is this:

“2 And I saw another angel ascending from the east, having the seal of the living God: and he cried with a loud voice to the four angels, to whom it was given to hurt the earth and the sea, 3 Saying, Hurt not the earth, neither the sea, nor the trees, till we have sealed the servants of our God in their foreheads. 4 And I heard the number of them which were sealed: and there were sealed an hundred and forty and four thousand of all the tribes of the children of Israel.”

The angel with the seal of God has a task to do. He cries out for the other angels to hold back the “four winds” until he is able to seal God’s servants. Later, John hears a report of the results of this work. The number is tallied – it is 144,000.

“I saw angels hurrying to and fro in heaven. An angel with a writer’s inkhorn by his side returned from the earth and reported to Jesus that his work was done, and the saints were numbered and sealed. Then I saw Jesus, who had been ministering before the ark containing the ten commandments, throw down the censer. He raised His hands, and with a loud voice said, ‘It is done’.”

That angel with the writer’s inkhorn appears in Ezekiel:

“3 And the glory of the God of Israel was gone up from the cherub, whereupon he was, to the threshold of the house. And he called to the man clothed with linen, which had the writer’s inkhorn by his side; 4 And the Lord said unto him, Go through the midst of the city, through the midst of Jerusalem, and set a mark upon the foreheads of the men that sigh and that cry for all the abominations that be done in the midst thereof.”

Imagine this scribe going through the city, looking for anyone that he hears “sigh and cry” for its abominations, placing God’s mark on their foreheads. This is the same as John writing that the angel with the seal is looking for “the servants of our God.” Every time he finds one, he puts the seal on them. When he has thoroughly completed his work, he returns to Jesus with a report of the results.

The number of the sealed is not prescriptive. It is descriptive.

To some people the number of the 144,000 sealed servants of God sounds peculiar. It also seems like a dreadfully small number to others. There could be a temptation to say to yourself, There’s not much hope for me, I will probably miss out. This is mistaken.

Just like there was spare room on the ark, there will be spare room for all who wish to take shelter under the protection of God by receiving the seal. The peculiar number that is reported by the angel is indeed unique but does not mean that God is being arbitrary – it is descriptive, not prescriptive.