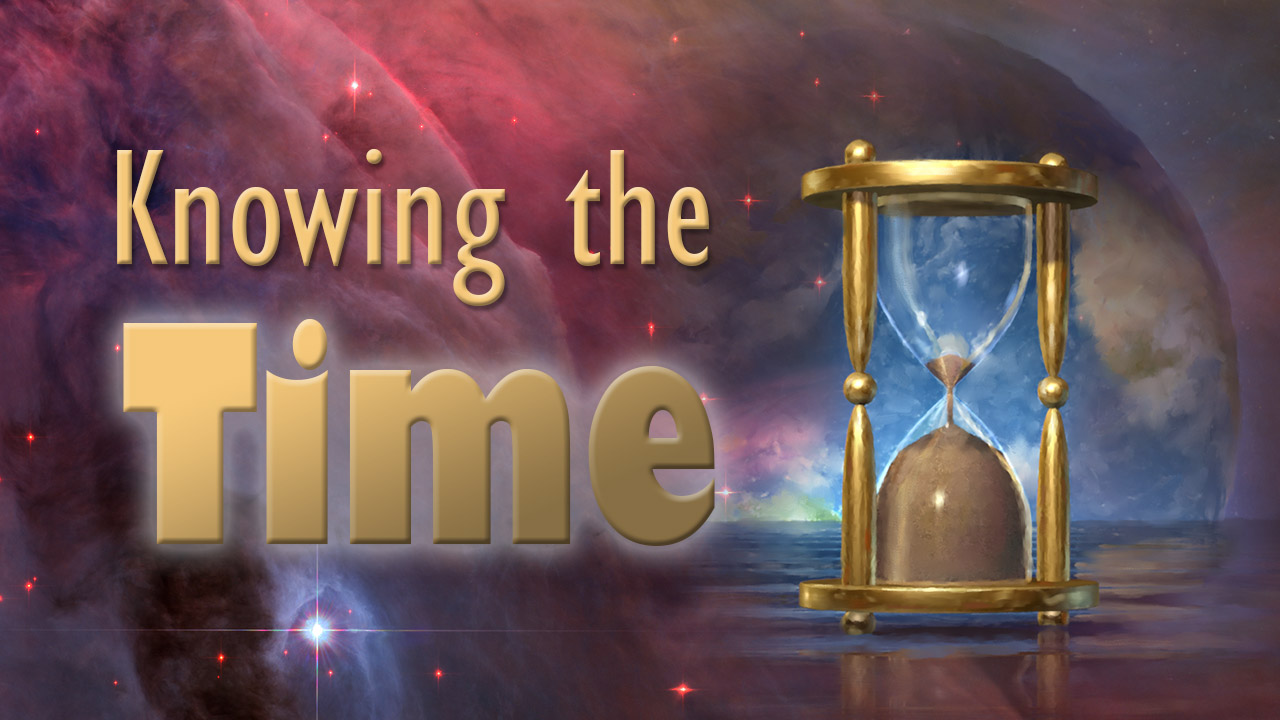 As a follow-up to the study “Time No Longer,” we present specific evidences on the fallacy of messages which attempt to attach dates to future events.

How to Know the Time

How are we to know the time today?

“11 And that, knowing the time, that now it is high time to awake out of sleep: for now is our salvation nearer than when we believed. 12 The night is far spent, the day is at hand: let us therefore cast off the works of darkness, and let us put on the armour of light.” Romans 13:11, 12.

Is it literally knowing the “time” of Christ’s coming?

Instead, what has He given us?

“And when these things begin to come to pass, then look up, and lift up your heads; for your redemption draweth nigh.” Luke 21:28.

What does “time no longer” mean for God’s people today?

“Time has not been a test since 1844, and it will never again be a test.
“The Lord has shown me that the message of the third angel must go, and be proclaimed to the scattered children of the Lord, but it must not be hung on time. I saw that some were getting a false excitement, arising from preaching time; but the third angels message is stronger than time can be. I saw that this message can stand on its own foundation and needs not time to strengthen it; and that it will go in mighty power, and do its work, and will be cut short in righteousness.” Early Writings, pp. 74, 75.

When God has not revealed something, what should we do?

“The secret things belong unto the Lord our God: but those things which are revealed belong unto us and to our children for ever, that we may do all the words of this law.” Deuteronomy 29:29.

Has God chosen to reveal the time of the second coming?

“But the day and the hour of His coming Christ has not revealed. He stated plainly to His disciples that He Himself could not make known the day or the hour of His second appearing. Had He been at liberty to reveal this, why need He have exhorted them to maintain an attitude of constant expectancy? There are those who claim to know the very day and hour of our Lord’s appearing. Very earnest are they in mapping out  633  the future. But the Lord has warned them off the ground they occupy. The exact time of the second coming of the Son of man is God’s mystery.” Desire of Ages, pp. 632, 633.

What about in general terms—a few years away?

“You will not be able to say that he will come in one, two, or five years, neither are you to put off his coming by stating that it may not be for ten or twenty years.” Review and Herald, March 22, 1892, par. 10.

Would anyone ever be given a message like this from God?

“God gives no man a message that it will be five years or ten years or twenty years before this earth’s history shall close. He would not give any living being an excuse for delaying the preparation for his appearing. He would have no one say, as did the unfaithful servant, ‘My Lord delayeth his coming;’ for this leads to reckless neglect of the opportunities and privileges given to prepare us for that great day. Everyone who claims to be a servant of God is called to do his service as if each day might be the last.” Review and Herald, November 27, 1900, par. 3.

Such a message does not come from God.

“Should we advance in spiritual knowledge, we would see the truth developing and expanding in lines of which we have little dreamed, but it will never develop in any line that will lead us to imagine that we may know the times and the seasons which the Father hath put in his own power. Again and again have I been warned in regard to time-setting. There will never again be a message for the people of God that will be based on time. We are not to know the definite time either for the outpouring of the Holy Spirit or for the coming of Christ.” Review and Herald, March 22, 1892, par. 7.

This is not a part of the message.

“I plainly stated at the Jackson camp meeting to these fanatical parties that they were doing the work of the adversary of souls; they were in darkness. They claimed to have great light that probation would close in October, 1884.

“I there stated in public that the Lord had been pleased to show me that there would be no definite time in the message given of God since 1844; and that I knew that this message, which four or five were engaged in advocating with great zeal, was heresy. The visions of this poor child were not of God. This light came not from heaven. Time was short; but the end was not yet. A great work was to be accomplished to prepare a people to be sealed with the seal of the living God.” Selected Messages, bk. 2, p. 73:2, 3.

“Ever since 1844 I have borne my testimony that we were now in a period of time in which we are to take heed to ourselves lest our hearts be overcharged with surfeiting and drunkenness, and cares of this life, and so that day come upon us unawares. Our position has been one of waiting and watching, with no time-proclamation to intervene between the close of the prophetic periods in 1844 and the time of our Lord’s coming. We do not know the day nor the hour, or when the definite time is, and yet the prophetic reckoning shows us that Christ is at the door.” Manuscript Releases, vol. 10, p. 270:1.

Will we be able to predict the latter rain?

“There will never again be a message for the people of God that will be based on time. We are not to know the definite time either for the outpouring of the Holy Spirit or for the coming of Christ.” Selected Messages, bk. 1, p. 188:1.

“Letters have come to me asking me if I have any special light as to the time when probation will close; and I answer that I have only this message to bear, that it is now time to work while the day lasts, for the night cometh in which no man can work…. But there is no command for anyone to search the Scripture in order to ascertain, if possible, when probation will close. God has no such message for any mortal lips. He would have no mortal tongue declare that which He has hidden in His secret councils.—The Review and Herald, Oct. 9, 1894.” Selected Messages, bk. 1, pp. 191, 192.

What does God want us to be always doing?

“35 Watch ye therefore: for ye know not when the master of the house cometh, at even, or at midnight, or at the cockcrowing, or in the morning: 36 Lest coming suddenly he find you sleeping. 37 And what I say unto you I say unto all, Watch.” Mark 13:35-37.

“We are nearing the great day of God. The signs are fulfilling. And yet we have no message to tell us of the day and hour of Christ’s appearing. The Lord has wisely concealed this from us that we may always be in a state of expectancy and preparation for the second appearing of our Lord Jesus Christ in the clouds of heaven.” Last Day Events, p. 33:3.

“The angels of God in their messages to men represent time as very short. Thus it has always been presented to me. It is true that time has continued longerthan we expected in the early days of this message. Our Saviour did not appear as soon as we hoped. But has the Word of the Lord failed? Never! It should be remembered that the promises and the threatenings of God are alike conditional.” Evangelism, p. 695:1.

Do we need something sensational that will give impetus to our work and message?

“The Lord showed me that the message must go, and that it must not be hung on time; for time will never be a test again. I saw that some were getting a false excitement, arising from preaching time, that the third angel’s message can stand on its own foundation, and that it needs not time to strengthen it, and that it will go with mighty power, and do its work, and will be cut short in righteousness.’” Review and Herald, March 22, 1892, par. 8.

Perhaps we should learn something from the response of William Miller, after the Great Disappointment:

“Brethren, hold fast; let no man take your crown. I have fixed my mind on another time, and here I mean to stand until God gives me more light, and that is, to-day, to-day, and to-day, until he comes.” William Miller, in Sylvester Bliss, Memoirs of William Miller, p. 278.