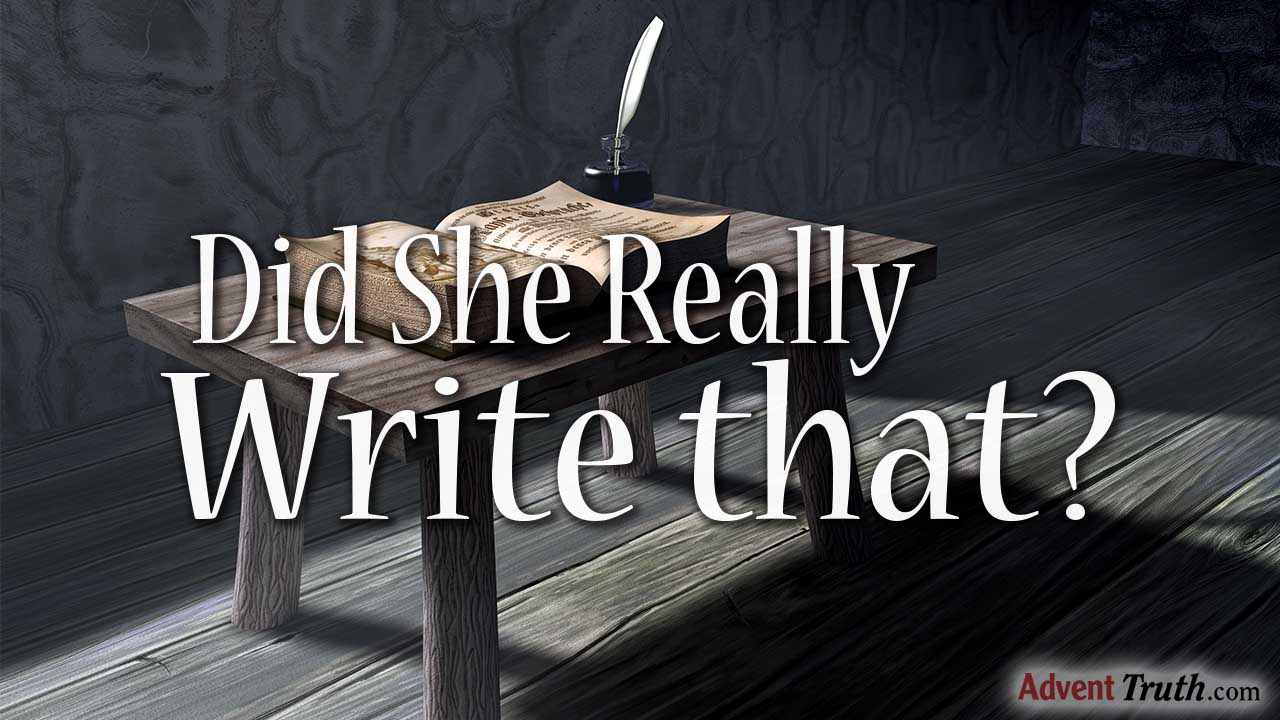 A little more on how inspiration works and whether we can trust what we read.

“6 The words of the Lord are pure words: as silver tried in a furnace of earth, purified seven times. 7 Thou shalt keep them, O Lord, thou shalt preserve them from this generation for ever.” Psalm 12:6, 7.

“Truth is inspired and guarded by God; and it will triumph over all opposition.” Acts of the Apostles, p. 11:3.

For more on that, see Can We Trust What We Read?

Yes, it has been suggested long ago that someone was manipulating the EGW writings. She had a few things to say in reply.

“I have my work to do, to meet the misconceptions of those who suppose themselves able to say what is testimony from God and what is human production. If those who have done this work continue in this course, satanic agencies will choose for them.

“I want to say, never repeat to another soul as long as you live the words that W. C. White manipulates my writings and changes them. This is just what the devil is trying to make all believe. W. C. White is true as steel to the cause of God, and no lie which is in circulation is of the truth.” Manuscript Releases, vol. 4, p. 240:1, 2.

“There are those who say, ‘Someone manipulates her writings.’ I acknowledge the charge. It is One who is mighty in counsel, One who presents before me the condition of things.—Letter 52, 1906.” Selected Message, bk. 3, p. 64:2.

What did she do with one secretary who did make changes [Fannie Bolton]?

“Sister White had several secretaries who typed and reviewed her manuscripts. They were not allowed to change what she wrote, though one of them tried twice.  This secretary was a well educated lady, and when Sister White called her in to talk with her, and pointed out where she changed the manuscript, the secretary said, ‘Oh, but Sister White, I’m sure that’s what you meant to say.’ ‘No!’ she said—‘I said what I meant to say—and you must not ever again change my manuscript.’ Well, sometime later this same secretary was called in again—‘You have changed my manuscript again.’ ‘Oh, but I’m sure you meant to say it this way.’ ‘No. I said what I meant to say. And now, my dear, since you cannot resist the temptation to change my manuscripts , I’m going to have to let you go that you may occupy a less important position. I had hoped to keep you as long as I had anything to write. I’m very sorry—but I cannot have my manuscript changed.’” Testimony by Alma McKibbon, audio recording, “I Knew Sister White.”

[Edit: there are many direct EGW sources on the above story if you would prefer to read them but it was just interesting to include this from a third party]

Getting someone to believe that something inspired is not actually reliable is actually a deep challenge to their faith.

What will be the very last deception for the people of God?

“Satan is… constantly pressing in the spurious—to lead away from the truth. The very last deception of Satan will be to make of none effect the testimony of the Spirit of God. ‘Where there is no vision, the people perish’ (Prov. 29:18). Satan will work ingeniously, in different ways and through different agencies, to unsettle the confidence of God’s remnant people in the true testimony.

“There will be a hatred kindled against the testimonies which is satanic. The workings of Satan will be to unsettle the faith of the churches in them, for this reason: Satan cannot have so clear a track to bring in his deceptions and bind up souls in his delusions if the warnings and reproofs and counsels of the Spirit of God are heeded.” Selected Messages, bk. 1, p. 48:3, 4.

What will eventually happen to those who continue in this line?

“I know your danger. If you lose confidence in the testimonies you will drift away from Bible truth. I have been fearful that many would take a questioning, doubting position, and in my distress for your souls I would warn you. How many will heed the warning? As you now hold the testimonies, should one be given crossing your track, correcting your errors, would you feel at perfect liberty to accept or reject any part or the whole? That which you will be least inclined to receive is the very part most needed. God and Satan never work in copartnership. The testimonies either bear the signet of God or that of Satan. A good tree cannot bring forth corrupt fruit, neither can a corrupt tree bring forth good fruit. By their fruit ye shall know them. God has spoken. Who has trembled at His word?” Testimonies, vol. 5, p. 98:2.

“It is Satan’s plan to weaken the faith of God’s people in the Testimonies. Next follows skepticism in regard to the vital points of our faith, the pillars of our position, then doubt as to the Holy Scriptures, and then the downward march to perdition. When the Testimonies, which were once believed, are doubted and given up, Satan knows the deceived ones will not stop at this; and he redoubles his efforts till he launches them into open rebellion, which becomes incurable and ends in destruction.” Testimonies, vol. 4, p. 211:1.

“One thing is certain: Those Seventh-day Adventists who take their stand under Satan’s banner will first give up their faith in the warnings and reproofs contained in the testimonies of God’s Spirit.” Spalding and Magan Collection, p. 305:4.

One thought on “Did She Really Write That?”