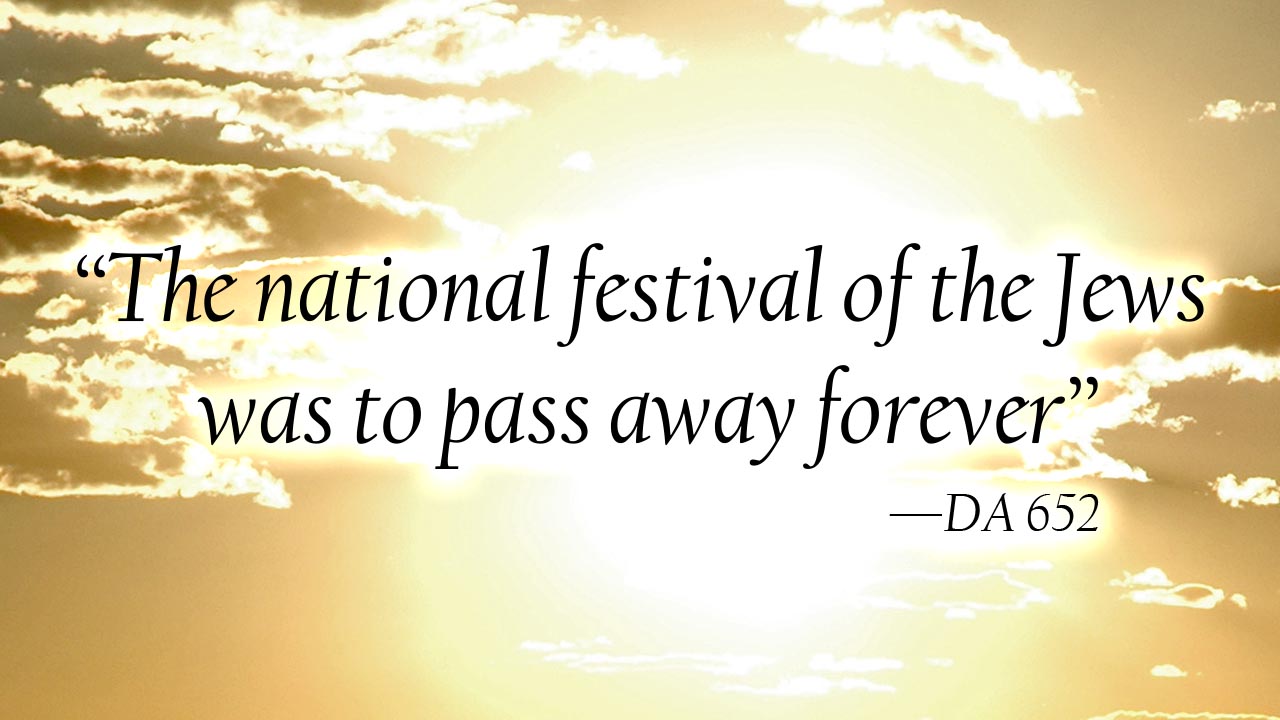 One of the very clear points which establishes the fulfillment of the festivals is the institution of the Lord’s Supper.

Jesus met with His disciples in the upper room to celebrate the Passover.

“15 And he said unto them, With desire I have desired to eat this passover with you before I suffer: 16 For I say unto you, I will not any more eat thereof, until it be fulfilled in the kingdom of God. 17 And he took the cup, and gave thanks, and said, Take this, and divide it among yourselves: 18 For I say unto you, I will not drink of the fruit of the vine, until the kingdom of God shall come. 19 And he took bread, and gave thanks, and brake it, and gave unto them, saying, This is my body which is given for you: this do in remembrance of me. 20 Likewise also the cup after supper, saying, This cup is the new testament in my blood, which is shed for you.” Luke 22:15-20.

“In the upper chamber of a dwelling at Jerusalem, Christ was sitting at table with His disciples. They had gathered to celebrate the Passover. The Saviour desired to keep this feast alone with the twelve. He knew that His hour was come; He Himself was the true paschal lamb, and on the day the Passover was eaten He was to be sacrificed. He was about to drink the cup of wrath; He must soon receive the final baptism of suffering. But a few quiet hours yet remained to Him, and these were to be spent for the benefit of His beloved disciples.” Desire of Ages, p. 642:1.

What did Jesus now institute?

“12 So after he had washed their feet, and had taken his garments, and was set down again, he said unto them, Know ye what I have done to you? 13 Ye call me Master and Lord: and ye say well; for so I am. 14 If I then, your Lord and Master, have washed your feet; ye also ought to wash one another’s feet. 15 For I have given you an example, that ye should do as I have done to you.” John 13:12-15.

“More was meant than the washing of the feet of guests to remove the dust of travel. Christ was here instituting a religious service. By the act of our Lord this humiliating ceremony was made a consecrated ordinance. It was to be observed by the disciples, that they might ever keep in mind His lessons of humility and service.” Desire of Ages, p. 650:2.

“The Passover was ordained as a commemoration of the deliverance of Israel from Egyptian bondage. God had directed that, year by year, as the children should ask the meaning of this ordinance, the history should be repeated. Thus the wonderful deliverance was to be kept fresh in the minds of all. The ordinance of the Lord’s Supper was given 653 to commemorate the great deliverance wrought out as the result of the death of Christ. Till He shall come the second time in power and glory, this ordinance is to be celebrated. It is the means by which His great work for us is to be kept fresh in our minds.” Desire of Ages, p. 652:3.

Why was the Lord’s Supper so important for the disciples?

“In this ordinance, Christ discharged his disciples from the cares and burdens of the ancient Jewish obligations in rites and ceremonies. These no longer possessed any virtue; for type was meeting antitype in himself, the authority and foundation of all Jewish ordinances that pointed to him as the great and only efficacious offering for the sins of the world….

“It was Christ’s desire to leave to his disciples an ordinance that would do for them the very thing they needed,—that would serve to disentangle them from the rites and ceremonies which they had hitherto engaged in as essential, and which the reception of the gospel made no longer of any force. To continue these rites would be an insult to Jehovah.” The Review and Herald, June 14, 1898, pars. 15 & 16. [see also 5BC 1139:5, 6]

“[A]s He ate the Passover with His disciples, He put an end to the sacrifice which for four thousand years had been offered. In the place of the national festival which the Jewish people had observed, He instituted a memorial service, the ordinance of feet washing and the sacramental supper, to be observed through all time by His followers in every country.” Signs of the Times, May 16, 1900, par. 6. [see also 5BC 1139:1]

What was to happen to the Passover after this?

“Christ was standing at the point of transition between two economies and their two great festivals. He, the spotless Lamb of God, was about to present Himself as a sin offering, that He would thus bring to an end the system of types and ceremonies that for four thousand years had pointed to His death. As He ate the Passover with His disciples, He instituted in its place the service that was to be the memorial of His great sacrifice. The national festival of the Jews was to pass away forever. The service which Christ established was to be observed by His followers in all lands and through all ages.” Desire of Ages, p. 652:2.

The national festival of the Jews was to pass away forever.